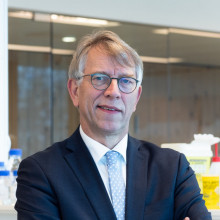 Geert de Snoo is director of the Netherlands Institute of Ecology of the Royal Netherlands Society of Arts & Sciences (NIOO-KNAW). He is also full professor of Conservation Biology at the Institute of Environmental Sciences (CML) of Leiden University.

His two main lines of research are:
- The effects of land use change on biodiversity and ecosystems. Here his focus is on nature conservation on farmland. How can we contribute to ecological recovery and transition to sustainable land use? Not only the impact of landscape elements, such as field margins, on biodiversity is examined, but also the socio-economic aspects are discussed.
- The impact of contaminants on biodiversity and ecosystems. More specifically, his focus is on the side effects of pesticides in both terrestrial and aquatic environments on invertebrates and vertebrates.
More recently, the conservation of large predators in human-dominated landscapes and the interaction between humans and wildlife have been added to his research portfolio.

Geert de Snoo studied biology at the Free University in Amsterdam and then became a researcher at the Centre of Environmental Sciences (CML) of Leiden University. During his PhD he investigated the potential of unsprayed field margins for enhancing environmental quality, promoting biodiversity and implications for agricultural practice. After his PhD, De Snoo acquired various grants from NWO, the EU, governments and the private sector. In 2003 De Snoo became a special professor in the field of nature conservation on farmland at Wageningen University. Since 2009 he is professor of Conservation Biology at Leiden University. So far, De Snoo has supervised about 35 PhD students.

Administrative positions:
Currently, De Snoo is member of the board of the Centre of Excellence for Netherlands Biodiversity Research. A combined research initiative of the Netherlands Institute of Ecology, Naturalis Biodiversity Center, the Royal Netherlands Institute for Sea Research and Westerdijk Fungal Biodiversity Institute. He is member of the Dutch Council on Animal Affairs, the independent council for multidisciplinary issues in the field of animal welfare and health for the Minister of Agriculture, Nature and Food Quality. He is chair of the supervisory board of Netherlands Centre for One Health (NCOH).

From 2012-2019 De Snoo has been Dean of the Faculty of Science of Leiden University. Between 2009 and 2012, he was Director of the Centre of Environmental Sciences at Leiden University. For five years he was member of the Board for the Authorisation of Plant Protection Products and Biocides (Ctgb).