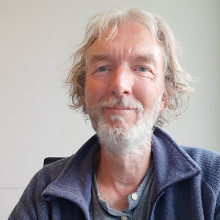 Ing. Peter de Vries (1964) graduated from Rijkshogeschool IJselland in Deventer in 1996. In 1997 he started working at the NIOO Centre for Estuarine and Marine Ecology in Yerseke. At this institute he assisted in the study of the settlement of Cerastoderma edule and the role of substrate dynamics on a tidal sandbank in the Westerschelde. In 1999 he started working as an assistant in a study dealing with the response of phytoplankton to changes in the coastal environment. This research was conducted in co-operation with RIKZ (part of Ministry of Water works and Public transportation) and used the mesocosms at Jacobahaven. In 2003, he joined the department of Plant Animal Interactions.

In 2009 a part of the department of Plant Animal Interactions was merged together with the department of Population of Animals into a new department Animal Ecology. Here Peter is responsible for the data from the aquatic part of this group. He is also responsible for the administration of the resightings of Bewick Swan with neckcollars and is a manager of www.geese.org and Movebank for Bewick Swans. Beside this he is the GIS specialist for Animal Ecology.

Work on Great Tits get more important and from 2021 onwards Peter is working during the breedingseason at Westerheide, the research area of the van Oers group. During the breeding season he is catching hundreds of tits and ringing, measure and bleeding them.

Peter is also a member of the OC. And last but not least; he is doing 1000+ important and less important things for the AnE department!

Publications, including not work related articles about birds can be found here: https://pure.knaw.nl/portal/en/persons/peter-de-vries/publications/