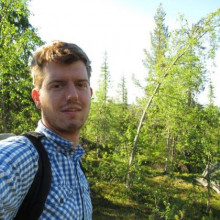 My research at NIOO focuses on dispersal as mechanism to cope with climate change. In Svalbard, Pink-footed Geese (Anser brachyrhynchus) traditionally breed in the west, whereas nowadays also the east (Edgeoya) becomes snow-free early enough in the season to serve as breeding habitat. Pink-footed Geese have recently colonized this area, and we expect them to be better matched with the local food pulse than geese on traditional grounds, resulting in higher fitness. We also investigate to what extent the annual cycle differs between geese of both areas in terms of energy and time budgets and migration timing and routes, and whether geese of both areas are genetically differentiated. We will test aggression, docility and stress resistance during handling as measures of personality to see if personality may have played a role in the colonization process.

I did my Bachelor at Wageningen Universtiy focusing on Ecology and Biodiversity, with a thesis on Age- and density-dependent breeding success of Goshawks (at NIOO, A.J. van Noordwijk, and WUR, D. Kleijn). I moved to Groningen for the Topmaster Programme Evolutionary biology, with theses on Tidal migration of mobile benthic prey of Red Knots (at NIOZ, P.J. van den Hout and T. Piersma), the Relationship of personality with early-life body mass in Blue tits (at University of Turku, J.E. Brommer and B. Class), and Sex-ratio and sexual dimorphism in chicks of Honey Buzzard (at University of Groningen, C. Both and R.G. Bijlsma). After graduation I contiued working in Turku on the blue tit personalities.

Before and throughout my studies I have joined long-term breeding biology studies on raptors and meadow birds around my home-town Groesbeek, and assisted in fieldwork with Great Skuas on the Faroe Islands (University of Glasgow, S. Hammer), and with Arctic Skuas, Red-necked Phalaropes and Barnacle geese on Tobseda, Russia (NIOO, T.K. Lameris, and IMARES, R.S.A. van Bemmelen).

I am a keen fieldwork-based ecologist, valuing a holistic view and precise and standardised observations, also leaving room to respond to unexpected phenomena. Illustrative of such attitude is this quote by Tinbergen in the sixties:

"We did not tackle the problem by systematic experimentation but by collecting incidental evidence, which is not too difficult provided one has the problem continuously in mind during watching. As a rule, Nature makes numerous experiments for us and it is amazing how much evidence on can collect if one is continuously on the alert and appreciative of the possibilities." (N. Tinbergen (1960) The Herring Gull's World, p.99)