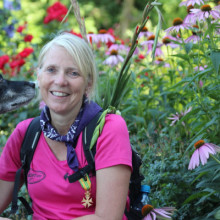 She started working at the NIOO in 1989, initially for the Department of Bodembiologie. From April 1989 untill April 1990 together with Prof. Dr. Riks Laanbroek, after that from April 1990 until December 1990 with Dr. Wietse de Boer.

After that she was working as molecular technician for Department of Plant Population Biology (1990-2005) together with Dr. Peter van Dijk and colleagues.

And subsequently for the Department of Terrestrial Ecology . Here work now involves all kind of molecular techniques in several projects.

1996-... Biosafety officer: responisble for the license applications and supervision for working with Genetic Modified Organism at the MLI and MLII level.

2012-... Responsible for the license application from NVWA for working with quarantaine soil.