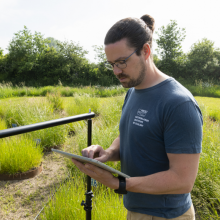 Ing. Freddy ten Hooven graduated from the Hogeschool van Hall Larenstein in 2009, where he studied plant biotechnology. Before that he studied Microbiology and Botany at Mondriaan Onderwijsgroep in Delft where he graduated in 2005.

Freddy did his first internship at the NIOO in Heteren in 2004-2005 where he worked on Glucosinolates in Brassica species with Prof. Dr. Nicole van Dam. His work mainly consisted of greenhouse experiments and HPLC analysis. In 2009 Freddy returned to the NIOO to do another internship on the bacterial- and fungal community composition using TRFLP with Dr. Tess van de Voorde. After graduation in 2009 Freddy worked as a technician at the NIOO for several months.

From 2010 - 2011 Freddy worked for a year at Groen Agro Control as a molecular technician. He was responsible for plant pathogen determination with various techniques like PCR, qPCR, ELISA and morphological determination.

In 2011 Freddy came back to the NIOO where he got a permanent position as technician in 2012. Freddy works mainly at the molecular- and microbial laboratory but is also well known with performing field-, mesocosm-, and greenhouse experiments and the collection and measurements of samples from soil, plants or other sources.

Freddy works together with several scientists from the TE department. For the last few years Freddy was involved in the ERC advanced grant project SPECIALS; of Prof. Dr. Ir. Wim van der Putten and the VENI project Specialists at work of Dr. Ciska Veen. Sincs 2021 he works on the Onder Het Maaiveld (OHM, underneath the mowing field) managing a large Soil Ecotron with different soil types and a national soil sampling program together with others from the OHM team.