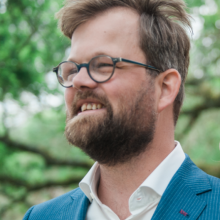 Jasper Wubs obtained his MSc (2010) from Utrecht University and PhD (2017) degree at Wageningen University (the Netherlands), where he has been studying plant-soil biota interactions and how they steer natural plant community dynamics and their use in nature restoration (with Prof. Martijn Bezemer and Prof. Wim van der Putten).

He then obtained an NWO Rubicon (2018; ETH Zurich) grant to study how soil microbiomes can be used to improve soil restoration in degraded arable soils in the central Kenyan highlands (with Prof. Johan Six and Dr. Martin Hartmann).

In 2021 Jasper returned to the Netherlands to coordinate data collection and analysis within the new IJkcentrum voor de Bodem (https://nioo.knaw.nl/nl/ijkcentrumbodem) as part of the Onder het Maaiveld (https://onder-het-maaiveld.nl/) project (with IUCN, Vlinderstichting, WUR, Centre for Soil Ecology). The project aims to map and benchmark the soil biodiversity of the Netherlands to provide action perspectives for land managers.

Recently, Jasper received a EU MSCA Postdoctoral Fellowship to study soil multifunctionality in relation to the stoichiometry of plants, microbes and soils (MultiSol) at NIOO.

Background
Many soils in sub-Saharan Africa (SSA) have been chemically, physically and biologically degraded. As a result an estimated 50% of agricultural soils do not increase productivity in response to mineral fertiliser addition, so called non-responsive soils. These soils can be restored using Integrated Soil Fertility Management (ISFM), but this requires substantial amounts of organic substrates (e.g. manure) to be added to the soil for many years. Many farmers in SSA do not possess these kinds of resources.
Plants, including crops, grow in tight associations with their specific soil microbiomes – the collective diversity of bacteria, archaea, fungi, protists, and other microorganisms found in soil. The soil microbiome can induce enhanced plant functioning, including improved nutrient acquisition, plant defence and tolerance of abiotic stresses, particularly when introduced as consortia of species. In this project we investigate to what extent naturally occurring microbiomes in Kenya can assist crop growth, and we test to what extend the can help maize crops to grow under progressively lower organic substrate inputs into the soil.

Objectives
This empirical study will combine modern high-throughput DNA sequencing methods and controlled greenhouse cultivations to explore the relationship between Kenyan maize crops and the natural diversity of soil microbiomes.
• Provide the first assessment of soil microbiome diversity in SSA in a range of representative soil types as well as agricultural and natural systems. Despite several, global assessments of soil biodiversity, the vast majority of the 11.7 million square mile continent remains completely unstudied.
• Screen the potential of naturally occurring soil microbiomes to improve the performance of maize crops.
• Use host-mediated selection to engineer microbiomes with improved function and assess to what extent organic substrate inputs can be reduced while still building soil fertility in conjunction with these engineered microbiomes.

Outcomes
This study will provide the first inventory of the functional capabilities of natural soil microbiomes to improve maize crop production in a tropical farming system. Using host mediated selection we will study to what extend microbiomes functioning can be optimized using low-tech methods. In particular we would like to test if engineered microbiomes can cope with progressively lower organic substrate inputs. Furthermore, the project will substantially expand the global dataset of African soil biodiversity.

Jasper actively takes his research out of academia and to practitioners, policy makers and the general public. For this work he received the 2016 Parnassia Award from the Radboud University Nijmegen.