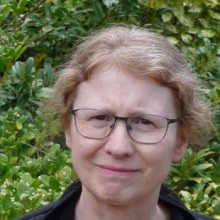 In 1986 Saskia Gerards starts working as a research-assistant at the Institute for Ecological Research (IOO) in Heteren on a 4 years project about nitrifying bacteria in well-drained grassland soils, supported by the Netherlands Integrated Soil research Program (PCBB). In 1992 work continues at the new Netherlands Institute of Ecology (NIOO-KNAW) and until 1995 she was involved in more studies with nitrifying bacteria. From 1995 to 2008, she participated in a number of projects, DGGE detection of fungi in and on plant roots, chitinolytic activities and auxin degradation in soils, with a genomic approach involving large-insert genomic libraries and transposon mutant libraries. From 2008 until present, she joined Paolina Garbeva’s research group in the department of Microbial Ecology, supporting projects on plant and microorganisms interactions, e.g. communication via production of secondary metabolites as antibiotics and volatile organic carbons, in soil and rhizosphere of plants.