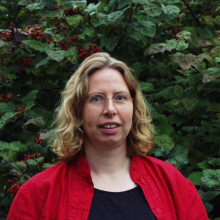 Ir. Agata Pijl graduated as a biotechnology technician in 1992 at the Hogeschool Rotterdam e.o. After this she studied biology at WageningenUR and graduated in 1995. She started working at the NIOO in 2000 for the Department of Microbial Ecology and also in 2003 for the Department of Animal Ecology. Here work now involves all kind of moleculair techniques in the projects of Eiko Kuramae and Marcel Visser.