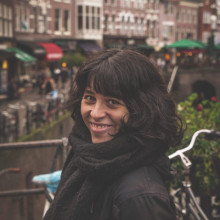 As a microbiology researcher with a background in environmental sciences, I had the chance to manage several projects in the frame of environmental pollutants, food safety, and antimicrobial resistance. During my work in technological centers, I was able to isolate, maintain, and characterize the microorganisms that live in endemic aromatic plants of the Mediterranean region.
Along all the experiences in my professional career, I understood the importance of novel strategies development. Innovative solutions are crucial to overcome the global health issues that our society is facing in the present. Contamination of natural resources, food spoilage, and infectious diseases are not to be belittled. I believe that biotechnology and microbiology techniques will help tackle this multifaceted problem from different perspectives.

Helena Franquet-Griell, Deborah Cornadó, Josep Caixach, Francesc Ventura, Silvia Lacorte
The number of cytostatic drugs used in cancer treatments is wide and increases every year; therefore, tools have been developed to predict their concentration in the environment to prioritize those for monitoring studies. In the present study, the predicted environmental concentrations (PECs) were calculated according to consumption data in Catalonia (NE Spain) for 2014. According to PECs and to the most widely reported compounds, 19 cytostatics were monitored in two sampling campaigns performed along the Besòs River. A total of seven drugs were detected at levels between 0.5 and 656 ng L-1. PEC and measured environmental concentrations (MECs) were compared in order to validate PECs. The PEC/MEC ratio presented a good agreement between predicted and measured concentrations confirming the PEC estimations. Mycophenolic acid, prioritized as the compound with the highest PEC, was detected at the highest concentrations (8.5-656 ng L-1) but showed no risk for aquatic organisms (risk quotient <1) considering acute toxicity tests performed in Daphnia magna.
https://doi.org/10.1007/s11356-016-8337-y