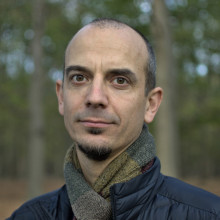 Microorganisms are responsible for decomposing plant material in soil, which makes them central players in greenhouse gas production, soil carbon storage, and recycling of plant nutrients. My research targets the ecological mechanisms of these processes. In particular, I aim to understand how viruses (bacteriophages) shape bacterial communities and redirect the flow of carbon and plant nutrients between plants, soil and atmosphere. This focus fits within the broader goal of understanding soil microbial lifestyles and their interactions with agricultural practice. I study these ecological mechanisms in realistic soil systems using a variety of chemical, stable isotope and molecular tools.

Small but deadly: The role of viruses in bacterial death and soil carbon storage

Billions of microorganisms live and die in the soil beneath our feet, affecting soil carbon storage and its release to the atmosphere. This project investigates how viruses drive bacterial death and the fate of bacterial remains, to better understand how soil can contribute to maintaining a healthy climate.