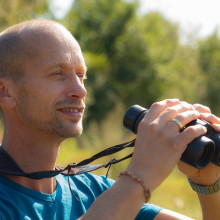 Dr. Henk P. van der Jeugd (1966) graduated from Groningen University in 1991, and obtained his PhD from Uppsala University in Sweden in 1999, working on 'life-history decisions in a changing environment - a long-term study of the Baltic barnacle goose population'. After his PhD he worked on the quantitative genetics of timing of reproduction in great tits at the Edward Grey Institute for Field Ornithology at Oxford University. Simultaneously, he continued to work on barnacle geese, setting up two parallel studies next to the one in the Baltic, one in Northern Russia and one in the Netherlands, to study latitudinal variation in life-history traits. In 2004 Henk made a career-switch into more applied research and became a researcher at SOVON - Dutch Centre for Field Ornithology, mainly working on human-wildlife conflicts involving geese. Henk worked and published on topics as diverse as the mating system of Giraffe, population dynamics of geese, penguins, owls and passerines, and the role of wild birds in the spread of zoonotic diseases.

In 2009 he became the head of Vogeltrekstation - Dutch Centre for Avian Migration and Demography, part of NIOO-KNAW. Vogeltrekstation coordinates all ringing activities of wild birds in the Netherlands. The extensive databank allows detailed analyses of birds’ survival rates, breeding success and movements. Vogeltrekstation stimulates the use of ringing data by initializing collaborations with research institutes and universities as well as conducting her own research.

Demographic processes as drivers of population change
Understanding how demographic processes are affected by environmental and anthropogenic drivers and evolution is crucial for the conservation and management of animal populations. I study these processes in a wide range of systems, from small passerine birds in urban and rural environments to wild geese breeding in a rapidly changing Arctic and wintering in the Dutch agricultural landscapes, from rare and endangered species to super-abundant species that give rise to conflicts. This research is carried out as part of the Centre for Avian Population Studies and its partners.

Birds as vector and host of zoonotic diseases
Zoonotic diseases constitute a serious human health risk in our rapidly changing world. Many arthropod-borne viruses have birds as their primary host, and are expanding towards the temperate zone. Birds are also host to Avian Influenza, that poses a serious threat to the existence of a growing number of wild bird populations. I combine surveillance of these viruses in birds using a well-trained network of citizen scientists with virological, immunological and ecological studies to understand and predict the spread of these diseases, and their impact on wild bird population dynamics.

Flexibility of migration in a changing world
By migrating to temperate and Arctic areas birds can profit from a short but rich peak in food abundance. Migration is a dynamic feature of birds’ life histories; its appearance and form depend on the balance between relative costs and benefits. I investigate how migration adapts to changes in the environment, including climate and land-use change, in breeding and wintering areas as well as en route. I make use of long-term ringing data and modern tracking techniques.