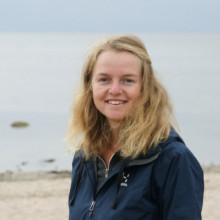 My name is Kerstin Bouma and at the moment I am working on my PhD project at the Aquatic Ecology group of NIOO-KNAW. I did my bachelor and master biology at the Wageningen University and graduated in 2020. I have always had a broad interest which led to very diverse research projects during my master: During my thesis I looked into the effect of pre- and post-natal predatory cues and how these shape offspring behaviour in the bank vole and for my internship I looked into the effect of the European bison on landscape heterogeneity in a Dutch nature area. During my free time I like to go outside for running or cycling and in the winter I love to go ice skating or skiing!

Now I am excited to broaden my knowledge from solely terrestrial ecology to a combination of aquatic and terrestrial ecology. This project also allows me to perform very diverse tasks by combining fieldwork, labwork and computerwork.

For my project I work in the Oostvaardersplassen, a Dutch nature area, created on former marine sediment from the Zuiderzee after land reclamation. The area consists of various shallow water bodies surrounded by reed and typha vegetation and patches of willow.
Eutrophic wetlands, like this one, are known to have so-called boom-bust cycles in which bird numbers are increasing in certain years and decreasing in following years. Yet, the exact driver of these cycles is still unknown. The main hypothesis is that this cycle realtes to water level and as a consequence to vegetation structure. Since, a drawdown is taking place in the Oostvaardersplassen from 2020-2024 to reset vegetation structure, it gives an unique opportunity to research how the different food web components are affected by a drawdown and how this might drive boom-bust cycles in wetland birds.