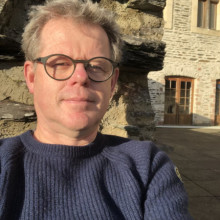 In 1990 Hans started as a lab technician in the Environmental Chemistry department of the Wijnand Staring Center in Wageningen, later Alterra at Wageningen University and Research. In the years that followed, he held this position in the various departments that arose from this. From nutrient analysis he developed more towards the analysis of organic contaminants (PAHs, mineral oil, PCBs, flame retardants, pesticides and herbicides), doing fieldwork and setting up experimental setups for determining greenhouse gases, degradation studies, etc.. For this he used techniques such as liquid and gas chromatography in combination with universal detectors and mass-selective detectors.

In 2011, he started as a lab technician at the Microbial Ecology department at NIOO-KNAW. At the chemical lab he developed methods for trapping and measurement of volatile organic compounds that are used as communication substances by plants, bacteria and fungi, the determination of greenhouse gases, organic components such as pharmaceuticals and the determination of stable isotopes. The techniques used are liquid and gas chromatographs in combination with universal and mass selective detectors such as MSMS, QTOF and IRMS, and themal desorption sample introduction.