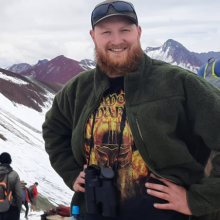 My interests have always been in the field of biology and ecology. Together with my passion for climbing and hiking it was only natural to make my job out of it.
I started my education at HAS hogeschool in 's-Hertogenbosch in Apllied Biology. During my education I had two internships. The first one was right here at the NIOO where I did research on rare soil bacteria under the super vision of Gera Hol. The second was in Florida at the University of Florida on nest predation of the invasive Burmese Python under supervision of Peter Frederick.
Throughout my education I tried to focus on wetland ecology and the ecology of soil systems, with great succes! Before I graduated I got a job offer from Martijn Bezemer to work at his group on soil legacies at the department of terrestrial ecology at the NIOO. I loved the work, but after one year there was vacancy at the department of animal Ecology, on which I replied and still work to this day.
I have worked for 5 years at Schiermonnikoog where I monitored the breedingsuccess of oystercatchers. Last season I made a vlog about it: https://www.youtube.com/watch?v=GsWE0hkCTNo&t=1s
Currently, I am working at the Hoge Veluwe where I monitor the breeding succes of nestbox breeders.
After the breeding season I work at the molecular lab to work on the bloodsamples that are gathered throughout the whole department. But next to that I also help out on winter catches and other fieldwork during the winter.