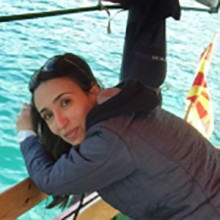 I am an integrative biologist, with a background in paleoecology, and paleolimnology and use diatoms (single-celled siliceous algae) as model taxon for my research. Specifically, I am interested in how species and communities responded to the climatic oscillations during the Quaternary. By applying a combination of diatom and geochemistry data from sediment records I reconstruct the ecology of lakes over geological time.

Earth's biodiversity faces major losses caused by global change, including climate warming and eutrophication. I am interested in understanding the species ability to adapt to changing environments in order to survive and persist. To disentangle the processes facilitating species adaptation, I am developing an integrative approach between two disciplines, experimental evolution and evolutionary paleoecology. A 1.36 Ma old fossil record from Europe's oldest and most biodiverse lake, Lake Ohrid (North Macedonia) provided a unique opportunity to study species phenotypic diversity and evolutionary patterns over multiple glacial-interglacial cycles. In addition, I use experimental studies with diatoms, to understand their short-term response to different temperatures and phosphorus loads. The combination of these disciplines will provide a comprehensive understanding of the evolutionary potential of the aquatic primary producers towards global change on the genetic, physiological, and morphological level of organization.