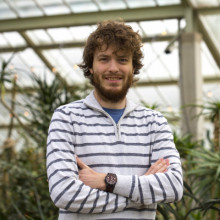 My interest is in plant adaptations to rapidly changing environments and extreme conditions. I like to study plant evolution both from a phenotypic approach using trait data as well as a genomic approach using phylogenomics and functional (comparative) genomics. I am interested in genome structure and genome size evolution as well. Over the years I have studied different plant systems with varying ecologies and evolutionary histories. I studied genome size and floral symmetry in poppies (Papaveraceae), phylogenomics and drought adaptations in aloes (Asphodelaceae, subfamily Alooideae) and, most recently, structural genome evolution and the distribution of resistance genes (NLRs) in conifers.

At the NIOO, I will start unraveling the urban evolution of common dandelions (Taraxacum officinale) by integrating genomics and phenomics along an urban-rural gradient. I will study both extant populations and historical herbarium collections to trace the evolution of these plants through space and time. This is an official collaboration with Naturalis Biodiversity Center and is funded by the Royal Dutch Academy of Sciences (KNAW). in urban and rural populations of dandelions in Dutch cities such as Amsterdam, Nijmegen and Maastricht. We have already collected plants in these cities with the help of students from Maastricht University and Radboud University Nijmegen. Adaptation of relevant traits such as flowering time, pollen morphology, seed size and growth rate will be studied in detail along these transects.

Dandelions reproduce almost exclusively asexually through apomixis and therefore contain 'frozen' genomes that do not undergo (sexual) recombination. This makes the plants independent of pollination but also potentially vulnerable to ecological and climatic changes. I will develop an accurate and versatile genotyping tool using a target capture (Hyb-Seq) approach with which we will characterise and identify (asexual) clonal lines in Dutch cities. Considering that the urban environment is a rapidly expanding habitat, it is both important and insightful to characterise which clonal lines are better adapted to urban pressures. With dandelions providing >80% of pollen and nectar food for insects in early spring (April) this is also a critical investigation for the preservation of insect biodiversity in cities and in the Netherlands in general.